They were produced for the 10th anniversary of the Poinsettia Campaign, an annual fundraiser for the Norwegian Cancer Society.

Every year since 2012, during the holiday season, different stars have been displayed in the shop windows of hospitals, shops and homes across Norway.

“Every Norwegian has a connection to the Norwegian Cancer Society,” said Hedda Foss Lilleng, Managing Director of Snøhetta Design.

“In many ways, the campaign has become an important part of the Advent season and Christmas for many of us.”

Snøhetta’s stars were designed with sustainability in mind from the start.

A priority was to develop designs that can be manufactured locally in Norway, avoiding the use of plastic. Another was to reduce the environmental impact of shipping Stars to customers.

This prompted the designers to explore a flat-pack design approach. Each star is made up of simple circles that are gently folded and layered to create 3D geometries.

The smallest design is most recognizable as a star made up of five paper circles in shades of green, gold and silver. This can be hung on a Christmas tree or used as a label for Christmas gifts.

A larger paper star has a more abstract shape that appears to change as it rotates. Primarily intended for hospital windows, it features a perforated pattern that emphasizes the sense of movement.

Each handcrafted piece consists of three curved discs framing a central tube. These different sized discs are made from untreated brass so their appearance will change over time. 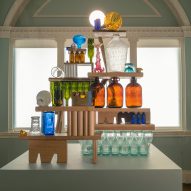 “The notion of time and care is reflected in the fact that brass is a living material that will change over time if left untreated,” Snøhetta said.

“You can always polish it back to its original condition, but if you leave it like that, it will age beautifully over time and last for generations.”

The stars can be purchased from the Norwegian Cancer Society, with all proceeds going to cancer research.

Snøhetta has also created a flat pack template that is available to download for a donation of as little or as much as you wish to pay.

The aim is to make the stars accessible to school classes, kindergartens and other group workshops that may want to create individual versions.

Over the last 10 years, the Poinsettia campaign has raised 200 million Norwegian kroner (£16.7 million) for the Norwegian Cancer Society, known locally as Stjerneaksjonen.

“We hope that patients who have to spend Christmas in hospitals will feel the warm warmth of these stars,” she said. “Furthermore, we both hope and believe that we can reach even more people and help make Stjerneaksjonen’s 10th anniversary a record year.”

Other recent projects from Snøhetta Design, the company’s designated design studio, include the Dezeen Awards nominee Intersection Table and the Forite tiles, made from glass recycled from ovens and microwaves.

This striking couch makes a strong statement on face masks

Elena Xausa, known for her vibrant, colorful illustrations, has died at the age of 38