Ahead of today’s launch of the Oceanic+ app on the Apple Watch Ultra, some people got early hands-on time with a beta version of the app. Developed by Huish Outdoors in collaboration with Apple, the app allows the Apple Watch Ultra to be used as a dive computer for scuba diving at depths of up to 40 metres/130 feet.

For those who don’t know, surfacing too quickly after diving can lead to decompression sickness, which occurs when dissolved gases like nitrogen in the blood and tissues form bubbles in the body due to the rapid depressurization. A dive computer aims to prevent decompression sickness by measuring depth and elapsed time during a dive and using an algorithm to warn you if you’re ascending too quickly.

The Apple Watch Ultra uses the Bühlmann decompression algorithm, which is said to be widely used and trusted throughout the diving industry.

The Apple Watch Ultra’s huge touchscreen makes the user experience significantly smoother than traditional dive watches, which can be quite unreadable at times. Think user interfaces that seem like relics from the days of Casio watches in the 1980s and you get a pretty good idea.

All in all, Jan Kamps was impressed with the Apple Watch Ultra and said it compares superbly to his dive watch from Finnish company Suunto:

Once in the water, there’s remarkably little to say about the Apple Watch Ultra as a dive computer: It’s easy to use; The crown and buttons are phenomenal as far as user interfaces go, the screens are well designed; and the important information is clear and very legible.

I brought my trusty old Suunto that has accompanied me on many dives to serve as my second dive computer for those test dives. The displays of the two dive computers were almost identical the whole time. The small differences are due to having the Suunto in my pocket while the Apple Watch was on my wrist.

Jan Kamps noted that two out of around 40 divers he tested Oceanic+ encountered unspecified issues with the app, but he wasn’t entirely sure if this was due to user error or the app in some way worked incorrectly. 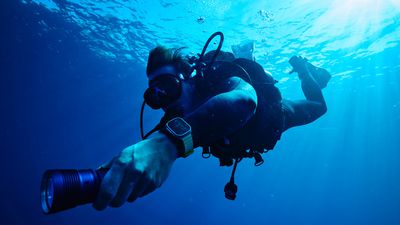 The Apple Watch Ultra costs $799 and features a new depth gauge and water temperature sensors that Oceanic+ works with. On a “cost-per-day basis,” Jan Kamps argued that the Apple Watch Ultra is an “absolute bargain compared to any dive computer on the market today” because it can be used for other smartwatch functions as well.

Vice versa, CNETJesse Orrall of , said the Apple Watch Ultra is more of a smartwatch than a dedicated dive computer and “sometimes made it difficult to use.” Specifically, he said most dive computers “don’t have a touchscreen or water lock and don’t require a passcode,” but it’s worth noting that the Oceanic+ website says once the Apple Watch Ultra gets in the water, it’ll work without a passcode for diving.

Orrall said that scrolling through the Oceanic+ screens can be difficult with the Digital Crown:

Scrolling through the various screens with the digital crown was doable with gloves on, but I accidentally scrolled past the screen I wanted a couple of times. I wish I could use the Apple Watch Ultra’s physical side buttons to “press and hold” and toggle the different dive screens.

The only complaint I would have was that the digital crown seemed a little finicky about over-spinning the data pages underwater. It was sometimes difficult to get the exact page you wanted. I would imagine it would be messier with gloves on. It’s almost as if the sensitivity was…well…too sensitive. But that’s a small drawback overall.

Both Orrall and Maker also pointed out that the Apple Watch Ultra can’t display how much air remains in a tank like some dive computers can.

Overall, Maker was impressed with the app:

The Oceanic+ app is a solid place to start, especially for casual divers. It includes everything pretty much any casual diver would need and does it in a silly, easy-to-use way. I mean, you literally just drop yourself in the water and the app will launch automatically. You don’t even have to press anything to use the app. During the dive it dutifully let me know when it was time to go up and would have warned me if I was ascending too fast. It also tracked my safety stop and reminded me when going through that depth.

The basic Oceanic+ snorkeling plan is free and includes depth, time and a log of recent dives. For $4.99 per day, $9.99 per month, or $79.99 per year, more experienced divers can gain access to decompression tracking, tissue loading, unlimited logbook capacity, and other stats for deeper dives. Maker said this pricing is “pretty reasonable,” especially for casual divers who already own an Apple Watch Ultra.

Oceanic+ is available on the App Store and requires an Apple Watch Ultra with watchOS 9.1 or later paired with an iPhone 8 or later with iOS 16.1 or later. A companion iPhone app serves as a digital dive logbook with detailed post-dive summaries.

Apple says users should always follow dive protocols, dive with a companion, and have a secondary device to track depth and time.

Here’s how to watch England vs Wales from abroad

Neuralink employees admit the company has killed 1,500 animals so far

Sorry, this NASA Mars Rover image does not show a flying UFO